A joint report of the World Bank and a division of China’s State Council entitled “China 2030” has been released (468 pages, all required … just kidding;). It is a blueprint for how China might transition from the easily earned high growth rates of a poor country playing catch up to the sustained and reasonable gains that might move it through the middle income range.

The problem is that only about 10% of countries have successfully navigated through that middle income range:

Many other countries that like China had reached so-called middle-income status—which the World Bank defines as annual per capita income of between $1,006 and $12,275—have failed to advance further up the income scale. Of 101 middle-income countries in 1960, only 13 had become high-income by 2008, according to the report.

Excuse the white space in the chart below … I’m working from a PC with a less than ideal suite of software available to me. Anyway, the chart on the right shows the odds aren’t in China’s favor. 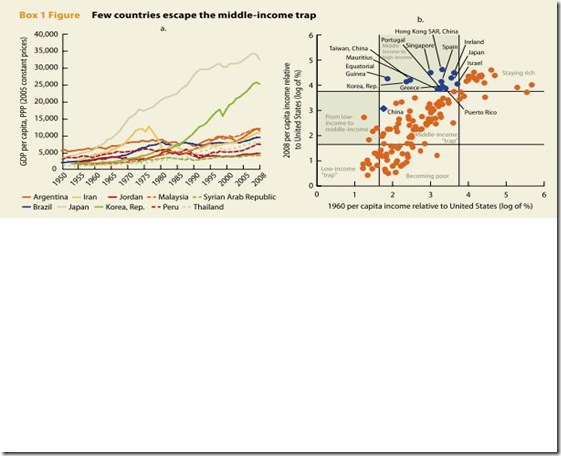 China faces two big problems.* The one mentioned by the report is the large proportion of state-owned enterprises.

… The report also recommended "breaking up state monopolies or oligopolies in key industries," including petroleum, chemicals, electricity distribution and telecommunications, and letting private firms compete in some sectors the state deems "strategic."

Those recommendations could require big changes by the Communist Party—a subject the report doesn't address. For instance, the party's personnel department now hires and fires managers of state-owned firms, giving it vast power over the direction of the companies. The Politburo Standing Committee, the party's most powerful organization, sets broad monetary policy …

The problem with all this is that China’s economic growth over the last 30 years has been led by the firms that are not state-owned. 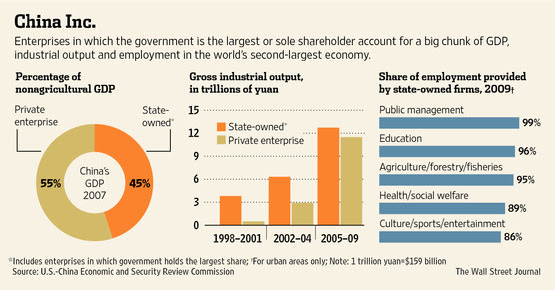 If you ask whether the party can have a meritocracy that produces good leaders, my answer is they haven't done so bad so far.

This is a big deal this year because China is undergoing a scheduled leadership transition. The new guys seem to be on the right page though:

China's leadership transition begins later this year when Vice President Xi Jinping is expected to become the new head of the Communist Party, succeeding Hu Jintao. Mr. Xi has been briefed several times on the recommendations, said individuals involved with the report, while Vice Premier Li Keqiang, who is likely to become premier—China's No. 2 position—endorsed the preparation of the report after Mr. Zoellick proposed it in late 2010.

Another thing that makes me think the China 2030 report is worth taking more seriously is that the unit that co-authored it reports to the highest levels of the government, but the guy whose signature is on it, Li Wei, doesn’t even have a Wikipedia page. To me, this means this job wasn’t pawned off on some prima donna with their own agenda; if they take this seriously, and it works, the top brass can claim all the credit, and if they fail they can suppress the whole thing.

Read the whole thing, entitled “Blueprint of China Reforms Leaves Role of Party Vague” and “New Push for Reform In China” in The Wall Street Journal.

* A second is one observed by Paul Krugman about 20 years ago in a piece entitled “The Myth of Asia’s Miracle”: most growth in Asian tigers has come from a transition from inefficiency to efficiency, not because of any special improvements in productivity. This issue is mentioned in Supporting Report 2 of China 2030.